We have teamed up again with an upcoming talent, this time with Bony Fly. A young producer from Geneva, Switzerland, that remixes our first 7” inch vinyl release Subactive feat Mikey Murka – Blam Blam.

Bony Fly is a guitarist, pianist and producer; he records bands and produces his music in the Wiki Estudio.

His productions are made in a combination of vintage gear and modern mixing techniques, using a computer and an analog mixing board with some outboard sound effects. Usually designed to be played on large sound systems, his productions are characterized by heavy bass lines, kicks, snares, and sometimes-subtle piano chords. They draw their inspiration from 80’s digital reggae to bass music, right through jazz, house, early techno and hip hop. However, Bony Fly’s main inspirations are Thelonious Monk, A Tribe Called Quest and King Jammy’s.

He has released his first record on a label he launched with a good friend NS Kroo in 2015: Sparring Partners.

Mikey Murka is no longer singing so it’s really a pleasure to re work this vocal and do a free download release.

This release features a vocal version, the riddim and a dub cut, full of vibes for your ears and sound systems. 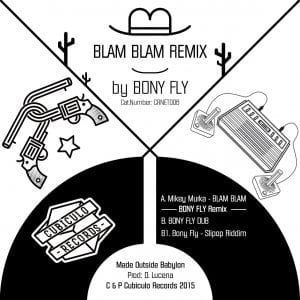